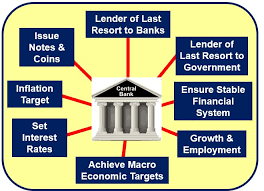 Quote for the Week,

"There have been three great inventions since the beginning of time:  The fire, the wheel, and Central Banking. - Will Rogers

What is Central Banking?

According to Investopedia: A Central Bank is a financial institution given privileged control over the production of money and credit for a nation or a group of nations.  In modern economies, the Central Bank is usually responsible for the formulation of monetary policy and the regulation of member banks.

Monetary policy is a central banks actions that influence the country's money supply and overall economy,  In the United States, the Federal Reserve establishes monetary policy.  It tries to make sure the money supply grows neither too quickly, causing inflation, nor too slowly, hampering economic growth.  Ideally, inflation is 2-3% annually, which keeps prices stable.  The Fed, through adoption of other monetary policies, also tries to assist in keeping unemployment low.

The critical feature of a central bank—distinguishing it from other banks—is its "legal monopoly" status, which gives it the privilege to issue bank notes and cash. Private commercial banks are only permitted to issue demand liabilities, such as checking deposits.

Central banks are inherently non-market-based or even anti-competitive institutions. Although some are nationalized, many central banks are not government agencies, and so are often touted as being politically independent. However, even if a central bank is not legally owned by the government, its privileges are established and protected by law.

Most central banks are governed by a board consisting of its member banks.  The country's chief elected official appoints the director.  The National legislative body approves that person.  The expectation is that it keeps the central bank aligned with the nation's long-term policy goals and hopefully free of political influence in its day-today actions and operations.  In the U.S. the Federal Open Market Committee—about how to reach those goals, do not require approval by the President or anyone else in the executive or legislative branches of government.

If you have any Questions about Investment and Banking please contact us.  We would love to share your questions with the rest of our readers.

Waddell & Reed is not a bank. Investment products are:
Not FDIC/NCUA Insured - Not Deposit - Not Bank Guaranteed - May Lose Value - Not Insured By Any Federal Government Agency