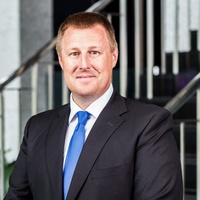 Jeffrey is the founder and the managing partner of Gemini Wealth Group.  He was previously employed as a limited partner at Edward Jones, seven of those years as a financial advisor.   His first three years was at their headquarters in St Louis; where his responsibilities included: training new financial advisors, account management, and processing of clients’ estates and financial transfers.

After ten years with Edward Jones, Jeffrey decided to follow a life-long ambition to develop his own practice and became an independent financial advisor.  To accomplish this, he made the transition to Waddell & Reed, where he established The Gemini Group in 2013.  That name changed to The Gemini Wealth Group in 2018, to better reflect the services that the group provides to its clients.

Jeffrey was born and raised in St Louis, Missouri; additionally he is an identical twin.  He graduated from Pattonville Senior High School and went on to attend college at South East Missouri State University in Cape Girardeau, Missouri.  There, he earned a Bachelors in Criminal Justice with an emphasis in Law Enforcement.  He then decided to go back to school and earned a Masters of Business Administration with a concentration in Finance at Lindenwood University in St Charles, Missouri.

Jeffrey is married and has two children, Elizabeth and David.  His wife, Denise, is a Catholic school teacher, plus they are active in their community and with their church.  Jeffrey volunteers with the Holy Spirit Catholic Church’s Athletic Association, as well as other youth sports programs.  He was a soccer and baseball/softball coach for both of his children throughout the years.  He is an active member in the Lions Club for over twenty years and was President of the Creve Coeur Lions Club in 2009-2010.  He is a leader in his son’s Boy Scout troop, as well as assisting with his daughter’s Girl Scout troop.  His hobbies include traveling with his family, golfing, astronomy and roasting coffee.  He also has many interests such as, horology, birdwatching, astrophotography and military history.

Waddell & Reed is not affiliated with any other entities referenced.  03/21